The Military Order of the Purple Heart’s Youth Programs are focused on fostering patriotism and good citizenship among America’s youth. We recognize outstanding leadership in cadets and midshipmen through the Senior and Junior ROTC Programs in the United States and Department of Defense Dependent Schools worldwide. In addition, we recognize outstanding leadership in non-ROTC/JROTC Youth Programs with the Badge of Merit 1782 Award, available to members of the Young Marines, Civil Air Patrol, Naval Sea Cadets, Boys and Girls Scouts and Pre-JROTC Mid-School Programs.

The need to work in concert with our Veterans Affairs Volunteer Service (VAVS) program is paramount as we attempt to remind our young of the commitment and sacrifice of those veterans in our medical facilities. They must never be forgotten. We plan to work in concert with the Boy and Girl Scouts of America in an effort to encourage Scouts to develop a merit badge for caring for our Nation’s Veterans through volunteer service. Many new programs are on the horizon and we look forward to working with the Patriots of the Military Order of the Purple Heart to make these successful. While it remains important to stay committed, we must focus on the need to set a higher standard for our Patriots and to interface positively setting the example for our youth with regards to their commitment to our veterans. 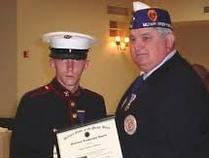 Several years ago, in 1987, the Department of Florida adopted a resolution proposed by Indian River Chapter 494 for the creation of a national Military Order of the Purple Heart ROTC award to be available for presentation by chapters and departments to local ROTC cadets throughout the country. This resolution, in turn, was adopted by the 55th National Convention held in Orlando, Florida in August 1987. In 1991, after all design and presentation details were worked out, the MOPH Leadership Medal for ROTC and Junior ROTC units became a reality. The impetus for the medal originated with George Rairden, Americanism Officer for Indian River Chapter 494.

Patriot Rairden’s idea was that the National Headquarters issue medals for academic and military excellence to deserving ROTC students throughout the country. This proposal was supported by the unanimous acclamation of the Floridian Purple Hearters. Key points of Resolution #10, passed unanimously by the 1987 National Convention in Orlando were as follows

The bad news is that of these three guidelines, not one was adhered to in the final creation of the Order’s award. The good news is that the medal we now have is enormously popular everywhere it has been utilized. What happened to change the design envisioned at the 1987 Convention to the final product follows.

Adhering to the decision to develop a Purple Heart ROTC Award, then Adjutant General Frank Athanason worked with one of our national suppliers to strike the medal. Initially, the medal was designed with five different bars across the top – leadership, merit, scholarship, recruiting and excellence. As work on the medal proceeded, it became apparent that what the cadets would value most was not the medal itself, which could seldom actually be worn, but a ribbon, which could be worn above the uniform pocket with other ribbons on a regular basis. Additional work produced the plain purple ribbon.

By 1990, medals and ribbons were in hand but much remained to be done before the actual issuance of the awards could commence. The Training Command of each service had to be contacted to obtain permission for the awarding of the medals, and for the wearing of the ribbon as an official part of the cadet uniform. Initial discussion with the Department of the Army indicated that the multiple formats were not viable. A large array of awards were already in existence (for example, the American Legion officer’s awards specifically for military excellence and scholastic excellence,) and the Purple Heart needed to find its own niche to occupy. After careful consideration, it was determined that a LEADERSHIP award would be most readily accepted by the services. The other awards (merit, etc.) were therefore dropped and official approval of all services for the newest ROTC award – the Military Order of the Purple Heart Leadership Award – was obtained. A certificate to accompany the medal and ribbon was developed by 1992. Thus neither the initial proposal for the criteria of the award nor the separate “ROTC and Junior ROTC medal concept survived from drawing board to reality. Also not surviving the planning process, however, was the “available at cost” idea.

Copyright © 2020 - All Rights Reserved - Military Order of the Purple Heart